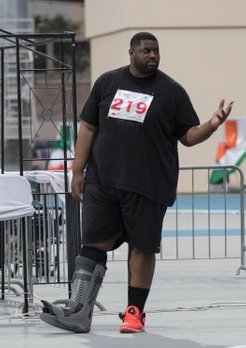 Lorn  in an athlete with a lower limb impairment  and is in Para athletics class F42.  His current event focus is the shot put.

Lorn begain working with Alison in November 2014 and has already shown significant improvement with a new personal best (by over 1m) in an indoor competition in January 2015.     He has since improved his personal best to 12.64m.  His Power of 10 profile is here.

Lorn was invited to be part of British Athletics Talent Development Programme  in October 2016, and travelled to Dubai ion February 2017 to be internationally classified.

Prior to his injury in 2007 was a successful American football player, having been signed for the Oakland Raiders.

Since beginning his athletics career Lorn has secured support from the Matt Hampson Foundation who are funding the  design and manufacture of a bespoke leg brace for throwing.  Lorn's training is also supported by UEL Sports,  where he is a student of construction, and GLL Sports Foundation. 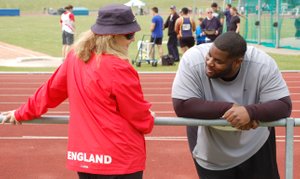