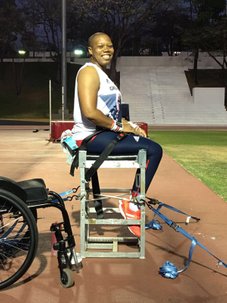 Nessa  in an athlete with a neurological impairment  and is in Para athletics class F34.

Nessa started working with Alison in December 2014, showing great commitment and progression in the shot putt and began  competing  at the beginning of April 2015. Just over 12 months later she gained her first internation honours for  Great Britain at the  2016 European Championships held in Grossetto, Italy where she finised 5th in the F34 Shot  Put.

A continued performance improvement  throughout 2016 saw Nessa selected to represent Great Britain at the 2016 Paralympic Games in Rio, where she finished 5th in the F34 Shot Put.

This meant that in 18 months Nessa went from never  competing in sport to being one of the country's leading elite Para Athletes.  In November 2016 she wss successful in  getting onto British Athletics funding as a Podium Potential athlete.

Nessa competed for Great Britain at the World Para Athletics (WPA) World Champs in London Although she finished in  the same position as in Rio (5th) she significantly closed the gap to the bronze medal winner. So the future is exciting.

Nessa was selected for the 2018 WPA European Champs held in Berlin in August and went on to win the Gold medal with a season best performance.  More recently, Nessa won the Bronze medal at the 2019 WPA World Champs in Dubai with a personal best.

Nessa began studying at the University of East London in 2016 and is  supported by UEL Sports and GLL Sports Foundation.