Kath began athletics in 2005 at a relatively mature age (28 years), but progressed rapidly through the F36 rankings.  Alison worked closely with Kath and her home based coach Alan Makin  until 2010 when Kath relocated to the Australian Institute of Sport in Canberra to work with Alison until 2011.  During this time Kath  improved her discus from 23.96m to 26.67m and Shot from 8.35m to 9.98m.

More information on Kath can be found here. 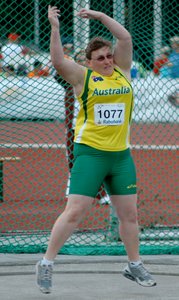