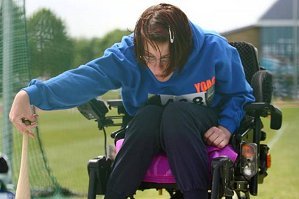 Maxine in an athlete with cerebral palsy and is in Para athletics class F32.

Maxine lives in Weymouth and is largely coached by her dad.  However, they began working with Alison in November 2011 as they wanted more technical input in the hope that they would improve performances enough to gain selection to the 2012 Paralympics GB athletics team.

In July 2012 Maxine was successful in gaining selection to the 2012 London Paralympic Games team for athletics.

Maxine then went on to become 2014 IWAS Junior World Champsionships. After shoulder surgery at the end of 2014 Maxine is rehabbing well and is focusing on the IPC Athletics World Champs   in Doha in October 2015.

More information on Maxine can be found here.