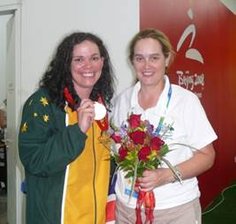 Amanda was a successful medal Australian Paralympian across 2 sports, swimming and athletics.  After winning 2 bronze medals in swimming at the 2000 Sydney Paralympic Games, Amanda switched to athletics in 2001 to embark on an even more successful medal winning sporting campaign.

More information on Amanda can be found here.